﻿ Dialogues with Chori at AGMs | 蝶理の株主価値向上に向けて

Dialogues with Chori at AGMs

Please find followings regarding dialogues at AGMs. Our proposals are consistently concerning capital allocation, cross-shareholdings and meeting with CEO and independent outside directors.

Parent company, Toray, releases its target of 10% ROE. What level of ROE do you aim?

We focus on ROA though ROE is one of important management index. We aim more than 10% ROE.

The policy on cross-shareholdings is strictly discussed and confirmed by our management meeting.

I doubt cross-shareholdings between listed company for business development shall be deemed as corrupt supply of profit. In the past, there might be things like that, and now just keeping such shares as cash equivalent. Anyway, please decide a policy not to hold cross-shareholdings.

I speak to institutional investors twice a year by giving result presentations. Other than that, we have no plan to meet individual shareholders.

How long will Chori keep such low dividend policy even though the financial condition has been improved? Considering the current accumulated equity capital, it is time to change the policy. Do you have any thoughts on flexible return to shareholders?

How much retained earnings do you think is appropriate? If there is any target amount, please tell us.

There is no specific target. But the current amount is not enough.

As I pointed out last year, Chori does not release the target ROE. Please don’t hide the target and release it.

ROE is an important management index and is described in our internal materials. But there is no target ROE.

Chori holds ca. JPY 1 bil Wacoal shares. Chori should sell those shares immediately. Wacoal is the fourth largest shareholder of Chori and this is a typical cross-shareholding. What is the purpose of holding Wacoal shares?

We hold the shares for the business development.

I cannot understand why holding Wacoal shares leads to the business development.
I talked with Wacoal directly and Wacoal told me that “Before, foreign funds bought Wacoal’s shares and we asked our clients to hold our shares as stable shareholders. However, now we don’t care if our clients sell our shares and there is no effect on the business relationship”.
I have already conveyed this information to Chori last summer. Why Chori still holds Wacoal shares?

I know the information but the board made a decision to keep the share for business development.

Why Chori would not meet us, though we are the third largest shareholder? Chori seems to have meeting with Toray who holds 53% of its share. Is there any rule that Chori only meets shareholders who hold shares more than specific rate? What percentage do we need to hold to have a meeting with CEO?

Yabu, a director in charge of IR, deals with these matters. CEO or independent outside directors don’t. There is no rule how much shares to hold to meet CEO. Toray is our important client and we meet Toray as a client.

Director Shimokobe, why you don’t meet a shareholder as independent outside director.

（CEO）From now on, both CEO and independent outside directors will consider and judge properly whether they will meet shareholders or not.

In the Mid-term Management plan which was released in April, ROE target was set as more than 10%. But 10% has been already achieved, so the target is meaningless.
We concern that profit does not increase correspondingly despite the accumulation of equity capital.
In 2006, ROE was more than 20%. Since then, equity capital has increased by 2.3 times while net profit has increased by only 1.3 times. This means that net profit has not grown in accordance with the growth of equity capital. Is it fair to say that in the future ROE will not rise because, even if net profit increase, those profits are saved as internal reserve and equity capital increases?

I cannot deny your anticipation of the trend in coming 3 years. But those figures could be different in such case M&A activities are implemented.

CEO, do you instruct independent outside directors not to meet individual shareholders or to consider it cautiously?

No. But based on our policy, cooperate planning division, IR division and the director in charge of such division, Yabu, deal with the matters.

It is not correct. In the board meetings, both of them give constructive and sometimes critical opinions.

I would like to ask both independent outside directors. Do you have intention to meet shareholders? Have you changed your opinions?

(CEO) I answer this question. Yabu is in charge of such matters as our IR policy.

At the last AGM, CEO answered that you will consider and judge properly as to the meetings with shareholders. Please don’t continue such answer on and on. Please decide to hold a meeting with us.

Chori accumulated equity capital and could not increase profits correspondingly. As a result of this, ROE declined.
（Omitted）
Chori should stop accumulating equity capital or saving cash equivalents nominally for the purpose of M&A activities and future investment. Saving is a good choice for family budgets but Chori is a listed company. Please consider how to use capital efficiently. Does Chori achieve 10% ROE as stated in the Mid-term Management plan?

I think we can if we accomplish the profit goal in the plan.

Chori holds Wacoal shares as a stable shareholder, and Chori and Wacoal mutually hold shares of each other. It is doubtful that Chori is allowed to use its assets to protect the directors of other company such as corporation to a takeover defence by the judgment of the board of Chori.
Furthermore, I doubt holding shares for business development shall be deemed as corrupt supply of profit which is prohibited in Companies Act. Business relationship can be obtained through competences such as quality of products or services. Please sell all the cross-shareholdings.

At the AGM in the year before last, CEO answered that you will judge properly regarding the meetings with shareholders and 2 years has passed since then. I suppose you answered that way because it was hard to say “no”, though you had no intention to meet shareholders. Such unfaithful attitude of CEO have bad effect on share price.
Corporate Governance code states that companies should engage in dialogue with shareholders since 3 years ago. Why don’t you change your attitude and meet investors and certain large shareholders if requested?

(CEO) I attend AGM, result presentations twice a year and briefing for individual investors once a year. Yabu, the director of the cooperate planning division, is in charge of individual meeting and I think it is enough. I’m not saying I never meet shareholders permanently. If it’s appropriate and if Yabu asks me, I’ll meet shareholders.

At the AGM in June 2018, we voted against the election of CEO, independent outside directors and an alternate director.
Since we invested in Chori and had dialogue, dividend per share (hereinafter referred to as “DPS”) has been continuously increased as below. However, the payout ratio is only less than 30%. Chori’s attitude toward the distribution to shareholders is far from appraisable.

Change of DPS and payout ratio

The ratio of votes in favour of previous our shareholder proposals

Our latest shareholder proposal in June 2018 got more than 60% favour votes by excluding Toray’s votes.

Ratio of favour votes to our proposals 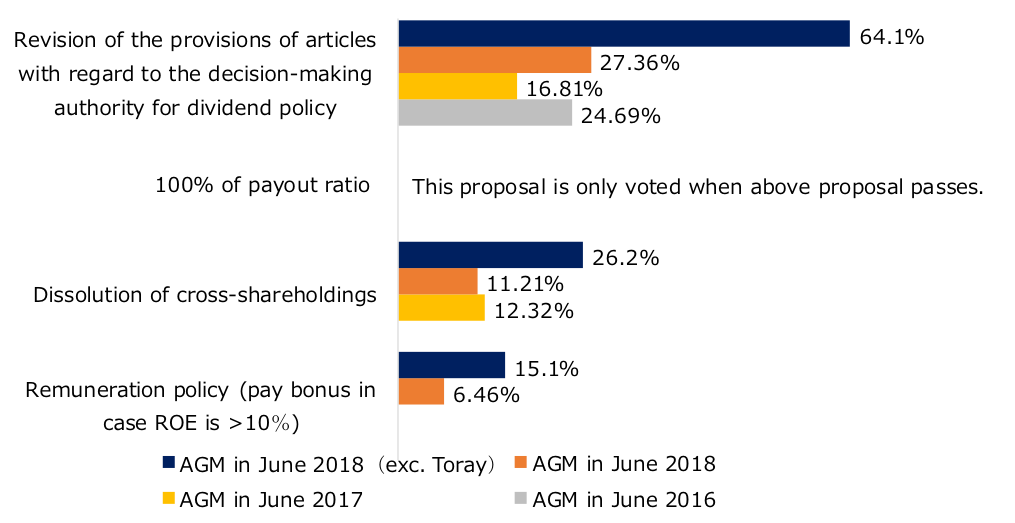